These are called “Vitamins” in English.

Each protein restores 1 Strength heart and adds 2 to Weight. Every 4 protein adds 1 to each of 3 different counters: Energy, Pre-Enhancement and Vulnerability. (For all of the preceding, this only happens if the number in question is currently allowed to increase.) The count from 0-3 protein is saved across evolution, though Pre-Enhancement and Vulnerability are not. For example, if a Digimon eats a total of 22 protein during the Baby 1 and Baby 2 stages, the Child stage starts with a protein count of 2, and eating another 2 protein will increase the affected counters.

Each species has a default/”full” number of energy, which it resets to upon sleeping for 8 hours continuously. The energy meter looks full at this number.

Wrapping: Confirmed on both variants of Japanese V1; Strong English V1; Japanese V2. Overfilling the energy by 10 resets it to the default value. To identify this:

Visible overfill: Only on the Weak English V1. The energy can be filled to 99 without any wrapping; the meter visibly overflows to the right for all Digimon; and at high numbers of energy, Digimon with 10 or 20 default energy will overflow the meter into the top-right followed by the bottom-left corner (the famous “!!!!” glitch).

The cap of 99 energy can be checked for 20-energy Digimon by counting relative to the bottom-left extra bar: after giving some number of protein which would mean energy above 99 if there was no cap, they always lose that bar after 10 battles. It can also be checked for Mamemon and Monzaemon due to their immunity to injury at high numbers of protein (see “Vulnerability” below). Other Digimon will die too quickly to check it. 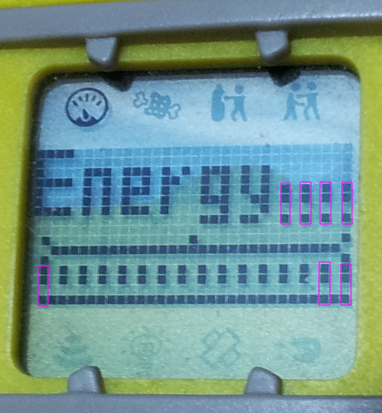 First is the Pre-Enhancement counter. Arbitrarily this description supposes that it starts at 0. It resets to 0 when the Digimon evolves. Wrapping the 4-protein counter makes it go up by 1. A care mistake makes it go down by 1. (Contrary to popular belief, training does nothing here.) The full possible range is -4 to +4. But during a single evolution stage, it can only go up 4 times and down 4 times. For example, if you put it up to 3, then it can only go down to -1, and then it can go up to 0 after that. Once it has moved up 4 times and down 4 times, it’s stuck at 0 until the Digimon evolves again. Most likely, there are two counters for protein power-up and care mistakes, each ranging from 0-4, with PreEnhancement = ProteinPowerUp - CareMistakes.

Then the Pre-Enhancement is combined with the Digimon’s current strength hearts to get the final Enhancement value which can be seen in the battle signals. The result is the average of the two, rounded down, with a minimum of 0. However, the Weak English V1 fails to take account of the strength hearts for this calculation, and behaves as if they are always at 0!

Combined with species, this determines the probability of being injured after battle. It ranges from 0-15 (additional protein after this appear to have no effect).